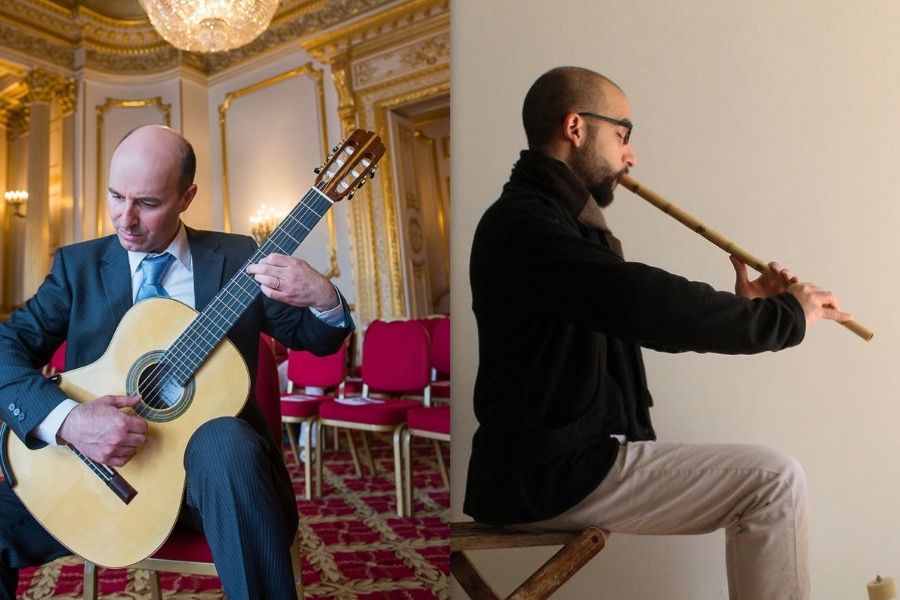 With a dexterity for Spanish and Latin American works, Jarjour effortlessly combines them with classical influences and his Middle Eastern roots.

Born in Damascus, Jarjour would go on to earn his Masters degree at the Juilliard School in New York, after having obtained his Bachelor’s degree from the Royal Conservatory of Music in Madrid. Jarjour’s music has received international recognition, and he has performed concerts across the world from Beirut to Madrid, Taipei, Lagos and Los Angeles and dozens of other cities.  Jarjour has famously played the Syrian premiere of Rodrigo’s Concierto de Aranjuez with the Syrian National Symphony Orchestra conducted by Solhi Al Wadi and Concierto Andaluz with the Syrian Philharmonic Orchestra conducted by Nahel Halabi.  He has served on the faculty of the High Institute of Music in Damascus, Syria and has lived and taught in Spain, Sudan, Belgium, the US and in the UK.

The world-Renowned Palestinian Nay master, global jazz flutist, and composer is best known for his virtuosity of the ancient flute – the Nay – which is accompanied by him playing leg-percussion and the frame drum simultaneously. His contemporary compositions offer thematic explorations that blend improvisation with global influences.

The award-winning artist graduated from Berkeley in 2018 and has since released two albums that expand the Nay’s musical expressions from melodic to percussive and harmonic sounds, crossing over through Jazz, Indian Classical Music and many other world music traditions.

Join us for this magical evening with Ayman Jarjour and Faris Ishaq to mark the launch of SACF, the Syrian multidisciplinary arts festival running in the nation’s capital.

** All tickets for Dima’s show remain valid for this show, and will be automatically transferred unless Kings Place hear from you. If you can no longer attend, you are entitled to a refund. Kings Place will be sending an email to all ticket holders, which you can reply to directly for a refund **