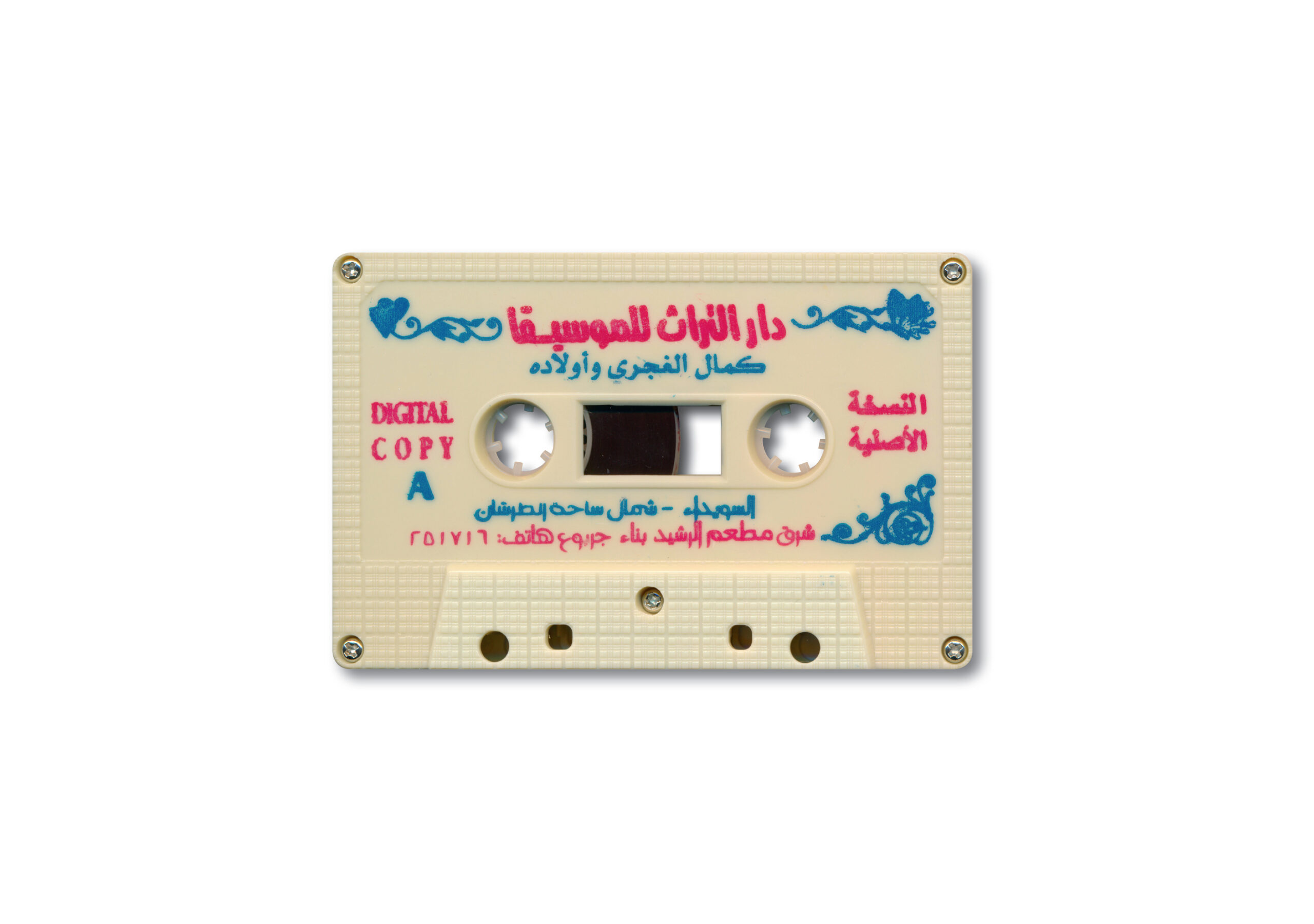 An eclectic evening celebrating Syrian Cassette Archives, an initiative to preserve, share and research analogue music tapes from Syria’s abundant cassette era (1970s to 2010). Bringing together seasoned performers from across London, the night will feature a live performance by singer Omran Zain, Kareem Samara on oud and Walid Zedo on percussion, visual projections by Manon Schwich, cassette and vinyl dj sets by Mark Gergis and Yamen Mekdad. This will be complemented by a panel discussion with the Syrian Cassette Archives team moderated by Sarah El Miniawy.

Syrian Cassette Archives is an initiative aiming to preserve, share and research sounds and stories from the cassette era (1970s-2000s) in Syria. At the heart of the initial collection are cassette tapes acquired by audio-archivist Mark Gergis during multiple stays in Syria between 1997 and 2010. The collection of tapes presents a wide-ranging overview of musical styles from Syriaʼs many communities, including Syrian Arabs, Assyrians, Kurds and Armenians, as well as Iraqis displaced by sanctions and wars throughout the 1990s-2000s. The archive is home to tape recordings of live concerts, studio albums, soloists, classical, religious, patriotic and childrenʼs music, with a special focus on the regional dabke and shaabi folk-pop music, performed and recorded at weddings, parties and festivities.

The tapes weren’t collected with the intention of forming a comprehensive overview of Syrian music or becoming a public archive. Instead, the collection reflects a period of personal research and exploration, aided by connections made with local music shops, producers and musicians during the time. Since its inception in 2018, the Syrian Cassette Archive’s team of collaborators and producers has grown, as has the collection itself, with hundreds of additional cassettes being added to the archive from donors and collaborators in Syria and abroad. As the breadth and scope of the project have expanded, so have its aspirations to become not only a digital archive but a hub for people interested in Syrian music to connect, learn and create.

Syrian Cassette Archives is supported by the Arab Fund for Arts and Culture – AFAC, Hauptstadtkulturfonds Berlin and Gwärtler Stiftung.

Mark Gergis is a London-based Iraqi-American producer, musician and audio-visual archivist known for his global music releases on the Sublime Frequencies label, among others. Since the early 2000s, his cultural research and output has focused on regional folk-pop music from the Middle East and Southeast Asia, as well as musical outputs of diaspora Asian communities in the US during the mid-to-late 20th century. Mark introduced the music of Syrian singer Omar Souleyman and his group to western stages in 2007, and worked closely with legendary Turkish musician Erkin Koray on major reissues of his early work.. His acclaimed two-hour audio-document, I Remember Syria (2003) was reissued in 2015, with proceeds going toward Syrian relief charities. Mark’s projects have received support from AFAC, UK Arts Council, Sound and Music, Hauptstadtkulturfonds and MACBA. In 2018, Mark founded Syrian Cassette Archives, an initiative to restore, preserve, catalog and share his collection of Syrian media from what can be called Syria’s cassette era (1970s-2010). Mark’s post-production, archival and audio mastering work continues for record labels such as Ostinato Records, Akuphone, Discrepant and 2182 Recordings, among others

Yamen Mekdad is a music researcher, collector, DJ and radio host based in London. His interests in field recording, archiving, radio and grassroots organising have led him to found Sawt of the Earth and Makkam, two London-based collectives. He is a frequent contributor to a number of radio stations, including Root Radio and Balamii Radio, and was a producer of DanDana podcasts on SOAS Radio. Yamen is currently co-producer/curator of the Syrian Cassette Archives, a web based platform that preserves the Syrian cassette era as well as curating and producing SACF’s (Syrian Arts and Culture Festival) music programme. Yamen has performed and collaborated with various artists/art institutions both in the UK and internationally.

Sarah El Miniawy runs Simsara Music PR & Management, working closely with an intimate roster of artists and organisations at the forefront of independent music in the Arab world, including Nadah El Shazly, Maurice Louca, Nancy Mounir, Maryam Saleh and Kamilya Jubran. She developed her PR experience working for the Barbican Centre for eight years whilst pursuing a master’s degree in music and anthropology at SOAS. Born in Algiers to an Algerian mother and an Egyptian father, she was raised between the two countries before moving to London in 2005. Sarah is currently based between Cairo and London, producing events, residencies & collaborations alongside managing the agency and its roster.

Hazem Jamjoum is curator of the British Library’s early twentieth century audio recordings of relevance to Arab and Gulf History. His work aims at digitizing, cataloguing and contextualizing this part of Arab communities’ audio heritage. He has also co-lead a project aimed at identifying similar at-risk audiovisual collections in the region with the longer term aim of fostering such preservation and curatorial work on a wider scale. His doctoral research in history at NYU traces the connections between the production of “Arabic music” as a concept and a commodity, and the implications of these production processes on supra-state collective identifications, pan-Arabism in particular.

Omran Zain studied Arabic classical singing at the Higher Institute for Music in Damascus, Syria, where he had the opportunity to study under the tutelage of skilled specialists. Omran has skillfully mastered fusing his specialization in classical singing with contemporary jazz. As a member of the National Syrian Orchestra, he performed at the Damascus Opera House. He also had the opportunity to work with the English band, Gorillaz. In 2016, Omran embarked on a successful European tour, including the Netherlands, United Kingdom, Denmark, Germany and Turkey, where he performed at renowned festivals such as Glastonbury and Roskilde. In 2017, he performed at WOMAD Festival in the UK. In 2018, he performed at the Royal Liverpool Philharmonic Orchestra. In addition to his ongoing compositions of original music, Omran’s forthcoming project sees him converting various traditional Arabic works into modern jazz pieces that incorporate elements of expressive dance and performance.

Kareem Samara is a musician, composer, and organizer from London. His practice investigates the intersections of struggles and combines traditional Arabic instruments with electronics to create a unique soundscape of protest. He is a serial collaborator (Smoked Poets, Ryan Harvey) and composes for various theatres in and around the UK.

Walid Zedo is a percussionist who studied both western and Arab classical music, graduating from the higher institute of music in Damascus. He was a member of the Syria National Orchestra, the Syrian National Orchestra for Arabic Music, the Arab Youth Philharmonic Orchestra and the Orchestra of Syrian Musicians, among several others. He has performed in prestigious opera houses around the world as well as numerous concerts in Germany, the United Kingdom, Morocco, Algeria, Lebanon and many more.

Manon Schwich Working as a media archivist for a decade in various contexts – both institutional and under the radar – Manon is an artist and researcher whose multidisciplinary, collaborative practice engages with geo-poetics, genders, memory and the way we take up space. In an attempt to creatively counteract reductive and biased ways in which histories are being told, she inventories libraries and archive collections, researches politics of representation, produces audio-visual events & experiments with images and sounds through an anti-colonial, feminist lens.